During Ramadan, which runs this year from 24 April to May 23, Muslims abstain from food and drink for most of the day, from dawn until sunset, when they wait for iftar, the evening meal that breaks the fast.

If you find yourself in Sarajevo during the time of this holy month, the essence of which is moderation and doing good deeds, here we offer some suggestions on how to best feel the spirit of Ramadan. 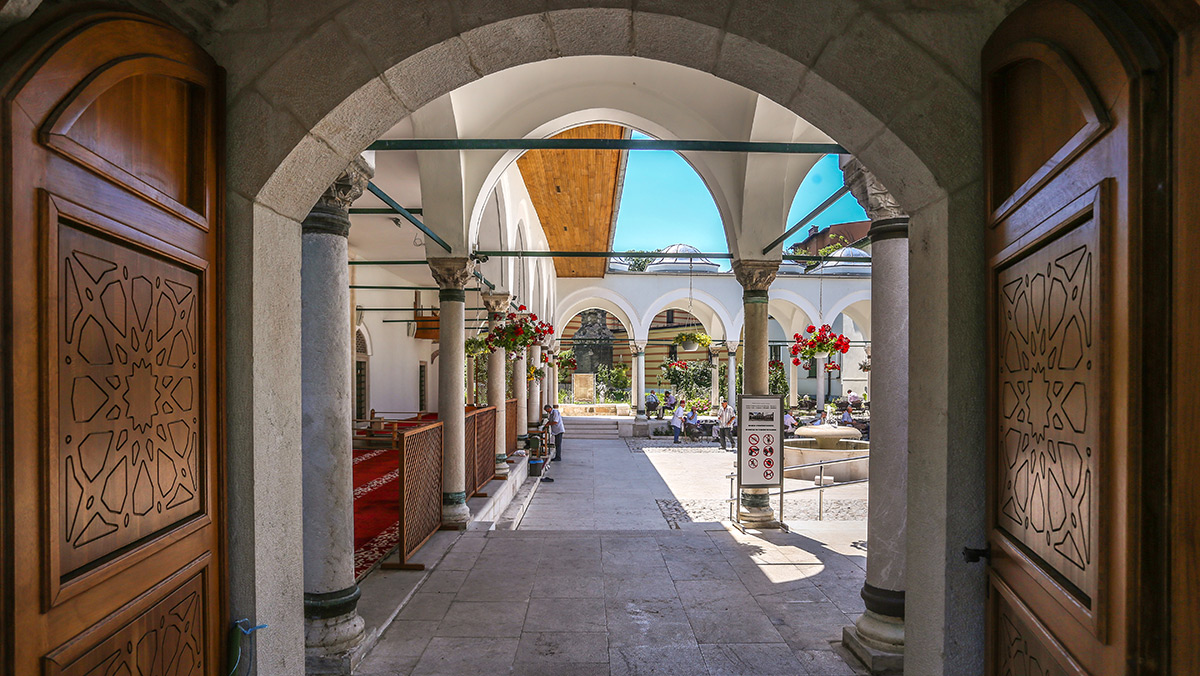 1. Attend muqabalas at some of the mosques

Oriental Baščaršija in the old part of town is the epicenter of activities throughout Ramadan.

When Ramadan falls during warmer months, it’s like a siesta on the streets of Baščaršija. Tourists, city guests and citizens who are not fasting enjoy the slow tempo out in the outdoor seating areas of charming cafes, and those who are fasting tend to spend time at home or at muqabalas.

Muqabalas (communal recitations of the Qur'an) that take place during Ramadan are held in mosques throughout BiH. This social activity is organized in such a way that one or more good reciters, usually a hafiz or hafiza of the Qur’an (a man or woman who has committed the entire Qur’an to memory), will recite passages of the Qur’an, while those who have come listen attentively.

When you attend your first muqabala, you are sure to enjoy the wonderful atmosphere of these gatherings, whether you choose to go to some of Sarajevo’s larger and more visited mosques – masterpieces of Islamic culture and civilization, like Gazi Husrev Bey’s Mosque and Emperor’s Mosque – or some of the more intimate mosques in the mahalas. 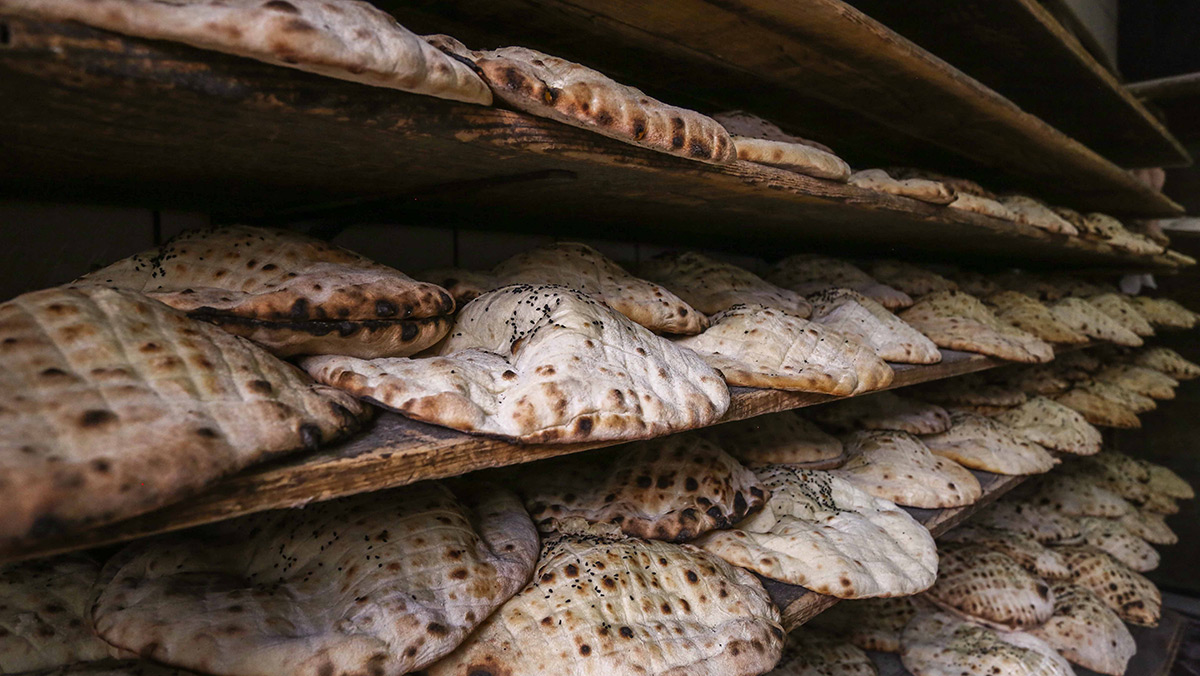 2. Stand in line for some hot somun

The smell of somun baking in a wood-fired stove is a smell associated with Ramadan in Sarajevo, and waiting in line in front of some local bakeries helps pass the time leading up to iftar – it’s all part of the Sarajevo Ramadan ritual!

A Ramadan table without somun is unimaginable. The difference between Ramadan somun and the somun available the rest of the year is that the former has black sesame seeds sprinkled all over the top.

It is assumed that this baked bread was brought to this part of the world by the Turkish army. The reason being that large quantities can be prepared quickly, making it an ideal food item for armies on long marches.

Somun owes its current popularity, in large measure, to those who run Sarajevo aščinicas and ćevabdžinicas, because the somun goes with the food that is served in these traditional restaurants all year round.

During Ramadan, don’t miss the chance to stand in line for your own somun in front of some well-known bakeries: Imaret, Poričanin, Alifakovac, Aišina Pekara....

And, when you finally get your hot and fragrant somun, it’s enough to put a bit of butter or cheese inside – and you’ll have a terrific meal! 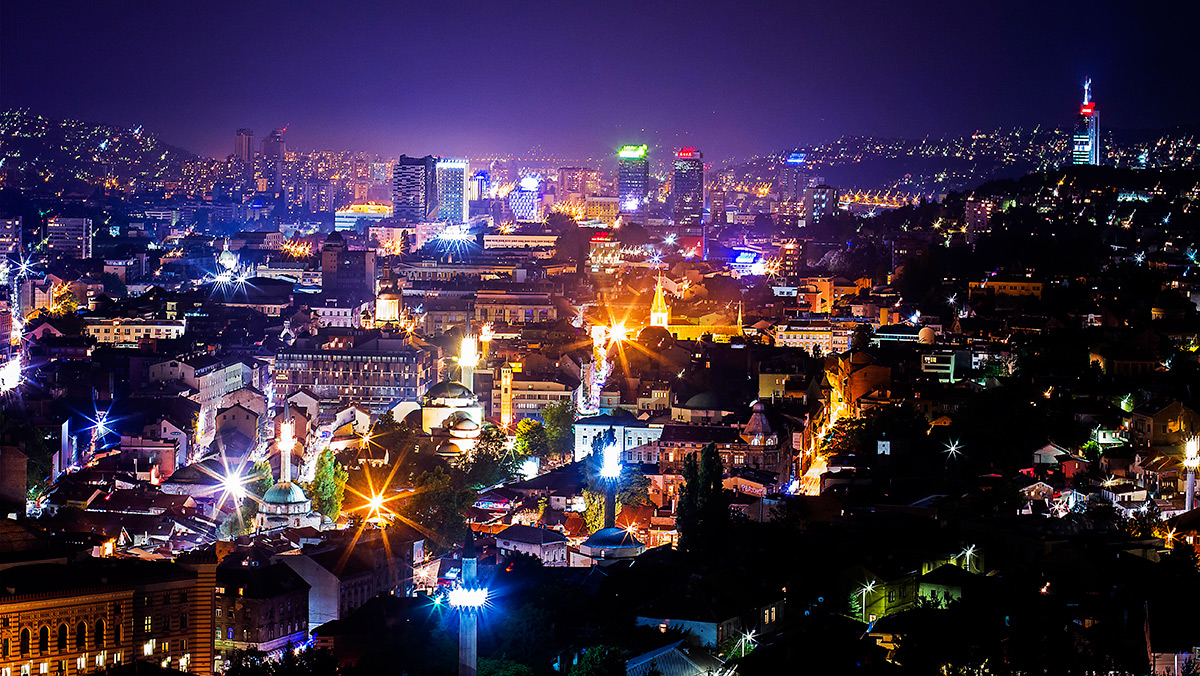 3. Enjoy seeing the lights go on and the sound of ezans

If you’ve been enchanted by the panoramic photos of Sarajevo, the ones that offer a bird’s-eye view of town, we can’t even begin to describe the feeling of making your way up through the mahalas to one of the overlooks; and, the moment following the cannon blast, the lights of minarets are turned on and they illuminate the city to the sound of ezans.

This mystical experience of looking out over a city dotted with lights is priceless, for visitors as well as for Sarajevans, who enjoy time together with family and friends over iftar.

If you’ve enjoyed the view of Sarajevo and would also like to have iftar, then be sure to visit the restaurants, Bijela Tabija, Đulbašča, Bašča Kod Ene, Kibe Mahala and Park Prinčeva, all of which are located in the mahalas up on the slopes around the old part of town.

If a Sarajevan invites you to iftar, especially if it is at a family home with a garden full of flowers up in one of the mahalas, don’t miss it for anything! 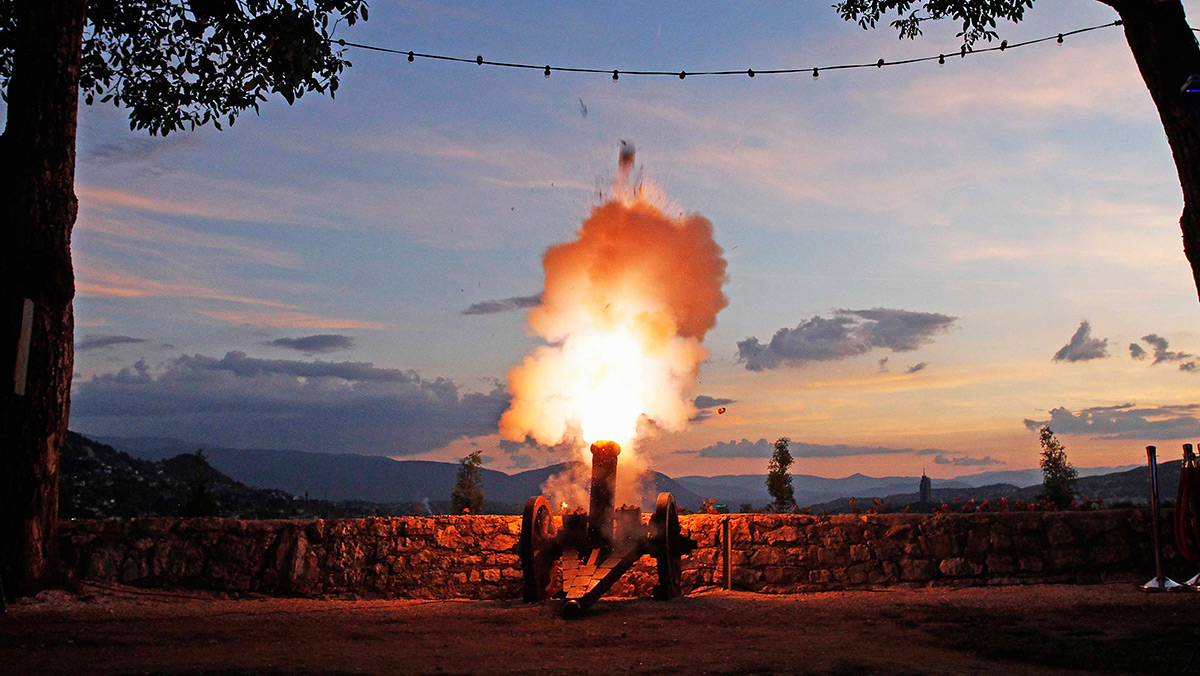 4. Wait for sunset with the firing of the cannon from Žuta Tabija

If you’d like to get a closer look to see how the cannon is fired – a sound anticipated by those who are fasting as they prepare iftar or take their places in restaurants around Baščaršija – you should definitely walk up to Žuta Tabija.

The firing of the cannon during Ramadan is a tradition that stretches back a few hundred years. This custom was abandoned during the time of the communist regime and again reinstated in 1997, and since then cannon master Smail Krivić has been firing the cannon at sunset from Vratnik’s Žuta Tabija, which is part of the old town of Vratnik, to mark the time of iftar.

Even if you are not fasting, you should still be sure to take in the atmosphere around the time of iftar at Sarajevo aščinicas and traditional restaurants, and be sure to try some terrific local meals.

The fast is usually broken with dates and a glass of water, lemonade or juice, then the other dishes are served.

The first dish on the Ramadan table is topa, which is specific to Sarajevo. It’s made by melting kaymak, butter, eggs and different types of cheeses over a low flame, and is prepared right before the time of iftar. It is eaten with hot somun that is broken by hand and dipped into the topa.

Some start the iftar with stew, and the most common ones are Begova, sarajevska, škembe and tarhana.

This is followed by home-cooked meals, including the most recognizable one, Sarajevo sahan, which is a combination of a few dishes – stuffed peppers, sarma (stuffed grape leaves and cabbage), šiš ćevap and sogan dolma. All of these dishes are served in sahans, deep metal dishes that have been made by Baščaršija coppersmiths for centuries.

Iftar finishes off with something sweet: compote, sweets with plums or roses, and most often there are the syrup-coated kadaif, hurmadžik, tufahija, baklava, apple pie….

It’s virtually essential for iftar to be concluded with some Bosnian coffee. 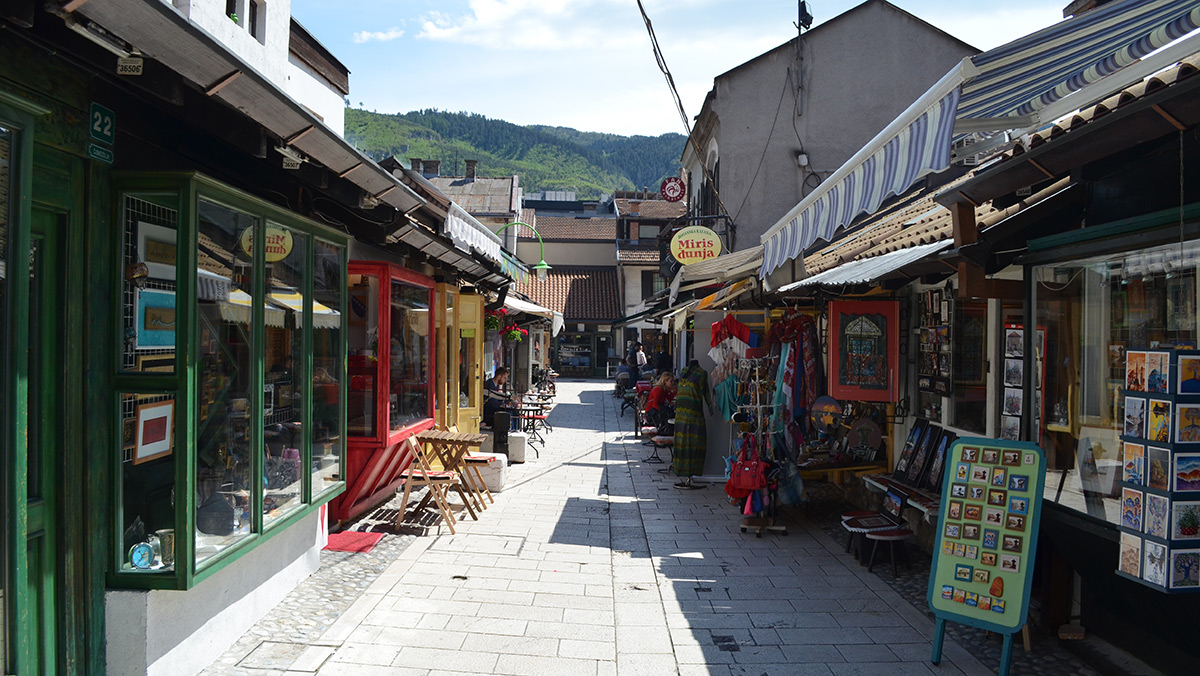 Iftar is usually followed by a stroll along the streets of Sarajevo, and in the summer months they are full of people and tourists who are looking for the perfect spot to rest over some coffee.

One of the most visited streets in Baščaršija is Čizmedžiluk, which is home to Baklava Dućan. This shop has traditional Bosnian desserts, so besides hurmašica, ružica and baklava, there is also the incredible džandar baklava and hot kajmak pies.

If you prefer crêpes, you can look for some at Fan Ferhatović, and after this sweet treat, you can enjoy the satisfaction of sitting at the nearby cafe, Miris Dunja, and having Bosnian coffee with some Turkish delight and natural fruit juices.

And, if you missed iftar or if you find Bosnian food too rich, you can look for some Mediterranean, vegetarian or gluten-free food on this street at the restaurant, To be. 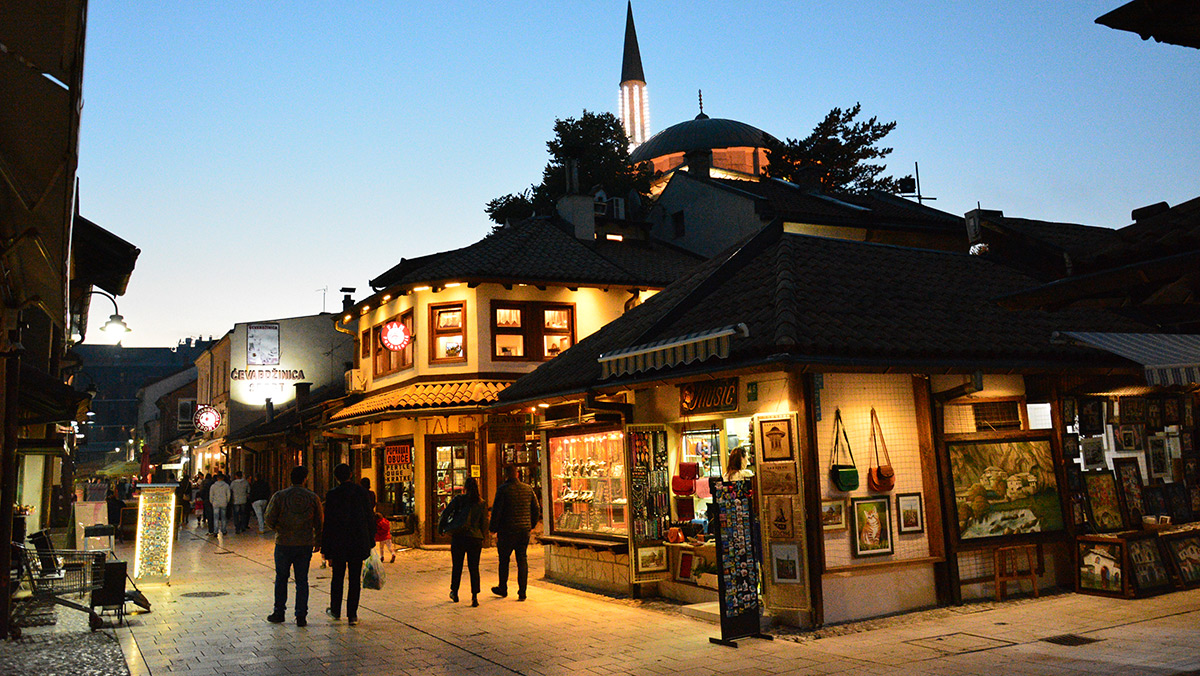 7. Experience Baščaršija between iftar and suhoor

Sarajevans who have iftar in Baščaršija often perform the maghrib (sunset) prayer in front of Bey’s Mosque. It’s here that they can break the fast with dates, Turkish delight and water that is served in front of the mosque.

By the time prayers have ended, the lines at restaurants have gone down and it’s easier to find a free spot for iftar.

After iftar, the streets are full again and there is a festive atmosphere on every corner: the courtyards of mosques are illuminated, the gates to mosques are open, and when darkness falls, the muezzins call believers to tarawih prayers (the last set of daily prayers that are performed only during Ramadan and are much longer than regular prayers).

After tarawih prayers, it’s not uncommon for people to stay on in čaršija, drinking coffee and socializing until dawn and suhoor – the last meal taken before resuming the next day’s fast. All of this makes Sarajevo Ramadan evenings so special, with Sarači Street and all of Baščaršija abuzz with people, as though it’s the middle of the day!

A walk around čaršija will take you back to some bygone time, so don’t miss a chance to visit Morića Han, the only preserved caravanserai in Sarajevo that served as an inn for merchant caravans during the Ottoman period; and Kolobara Han, Sarajevo’s first inn, which dates back to the 15th century. 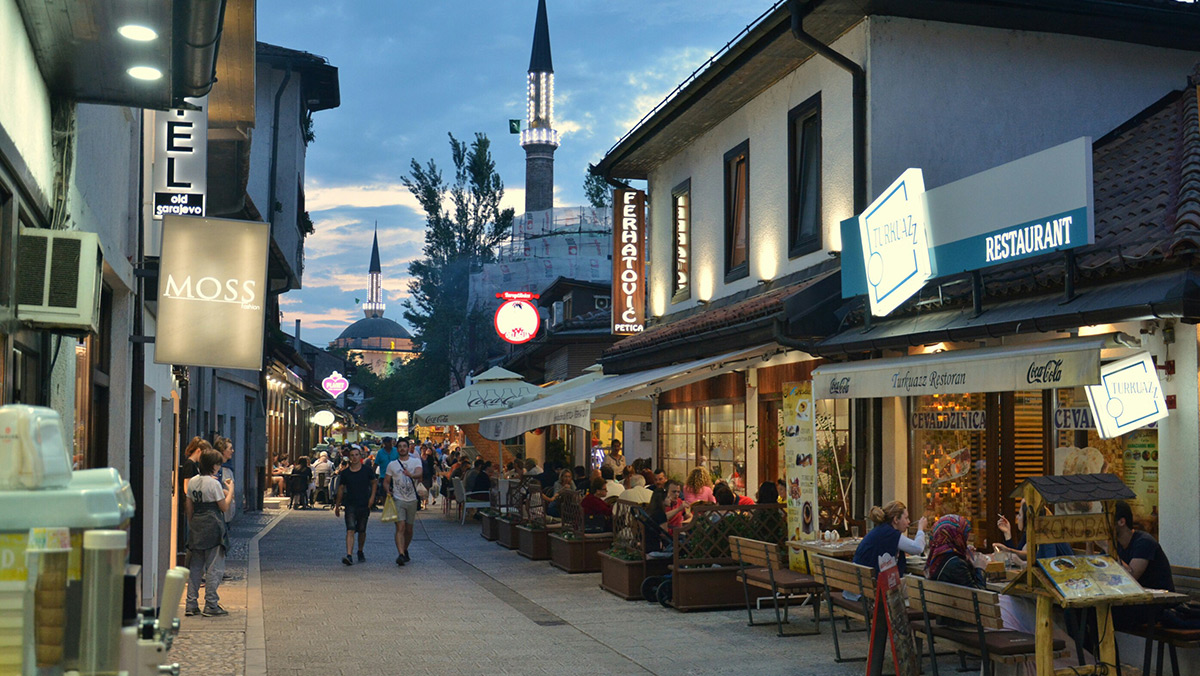 8. Explore Sarajevo up until suhoor (the pre-fast meal)

Right before dawn, those who are fasting retreat to their own homes to enjoy suhoor, the last meal taken before starting the day’s fast.

It is common to have some calorie-rich foods for suhoor, something to “hold” you throughout the day, as well as enough fluids to avoid dehydrating during the day-long fast.

And, if you managed to stay awake until dawn, be sure to walk around town and look for some places that prepare suhoor, like Jasmin in Baščaršija, or drop by some Sarajevo bakeries.

If you are near Ilidža, don't miss the sehur in Caffe Orient at the Malak Regency Hotel.